The Yeezy Quantum is slated to release as a surprise shock drop on February 13th-16th during All-Star weekend. You will be able to find the release on YeezySupply as well as Adidas homepage and select retailers worldwide. The anticipation has been building on the release since 2016, as it was ruled as a non-wearable on-court option because of the 3M lighting being a distraction. 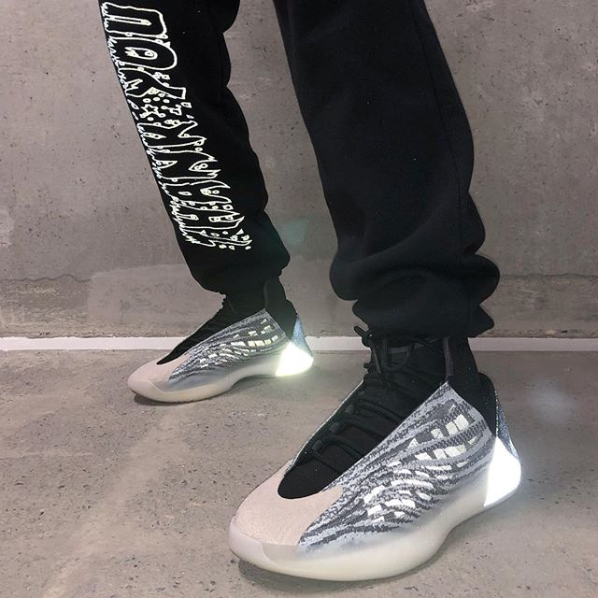 The team at Adidas has been working feverishly to deliver the inaugural court entry to the lineage of Yeezy products. We have been waiting for a Boost infused performance sneaker from Yeezy. The closest we have seen was the Yeezy 500 High which was presented as a weatherized cross hi-top trainer. This pair seems to be influenced by West's love of winged animals as the side detailing resembles feathers of a bird. Often known for his cheesy love of kitsch art one could see how he may have transmuted his love of winged animal motif into another basketball product (the first being the Yeezy II NRG) to drive home the message of taking flight in these sneakers. The shoe comes in mostly a variation of tonal greys ranging from cool to warm in a graceful fashion. The sole is a clear translucent gel. We get our biggest section of color blocking we have seen on a release with an eye-catching #3M patch on the midsole. Through the use of layering, we see his use play on dimension and illusion with the layering of transparency striping. If this release follows in the tradition of limited releases then you should expect the sited to crash within a minute or less of releasing. How do you think the performance experience will handle in contrast to other Adidas basketball sneakers? For more on fine art within streetwear, check out League Above.